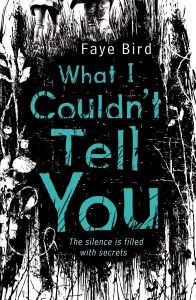 Title: What I Couldn’t Tell You

Laura was head over heels in love with Joe. But now Laura lies in a coma and Joe has gone missing. Was he the one who attacked her?

Laura’s sister Tessie is selectively mute. She can’t talk but she can listen. And as people tell her their secrets, she thinks she’s getting close to understanding what happened on that fateful night.

It’s so refreshing to see a take on selective mutism where the mutism isn’t triggered by a traumatic experience, even if the story itself does revolve around one.

Much of the narrative is told through Laura’s younger sister, Tessie, who I could relate to on a deeply personal level. Selective mutism is a severe social anxiety disorder that isn’t so widely known about and extremely misunderstood. I’ve always found the term ‘selective’ quite problematic because it suggests people choose not to speak, but the book’s portrayal is highly commendable as it challenges these misconceptions.

I loved the relationship Tessie struggled to have with her mum. The strain SM puts on personal relationships is too often overlooked. As a parent it can be frustrating, and at times I found myself feeling this frustration towards Tessie.

The plot itself progressed at a pace that wasn’t too fast or too slow. Between struggling with bullies, falling out with her best friend and falling in love, Tessie did what she does best. She listened. But how was she supposed to tell people the things she knew when she couldn’t speak? And would they even believe her? That would only leave her having to explain why they should believe her, and when you’re selectively mute you want to speak as little as possible.

In the end, she was forced to make a brave decision that could have easily been a reckless one, and this scene was pretty intense. Everything just escalates from that point and I didn’t want to put the book down. Personally, I felt that the revelation happened too quickly and I struggled to keep up with just how quickly. Though I had my suspicions as to who was responsible for Laura’s attack, I never would have guessed the motivation behind it.

Overall, this is a highly underrated book that deals with personal struggles as well as relationship struggles. There’s plenty of tension and a string of questions that’ll make you want to keep on reading. But most importantly, there’s a narratorial voice that you’ll either get or you’ll fail to understand, which I think is the most accurate description of someone with selective mutism.

Thank you, Faye Bird. I’m so glad this book exists. I just wish it was there at a time when my world was just like Tessie’s.