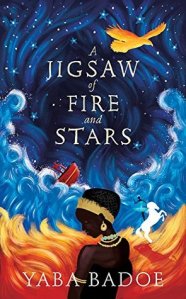 Title: A Jigsaw Of Fire And Stars

Fourteen-year-old Sante isn’t sure where she comes from, but she has a recurring dream of escaping a shipwreck in a sea chest as a baby with her lifelong companion, golden eagle Priss. In the chest was an African bamboo flute, a drum and a dagger inlaid with diamonds. Sante was found and raised by Mama Rose, leader of a nomadic group of misfits and gypsies. They travel around contemporary southern Europe, living off-grid and performing circus tricks for money. Sante grows up alongside two twins, knife-thrower Cat and snake-charmer Cobra, whom she is in love with. During a performance in Cadiz, Sante recognises two men from her dream. They come after her to retrieve the treasures from the sea chest. Sante finds out that she is an Ashanti princess, whose parents probably perished in the shipwreck. After Cat rescues a beautiful red-haired girl called Scarlett from a gang, Mama Rose’s band are forced to flee the city. But Sante and Cobra stay behind, determined to find out more about her family and where she came from.

Thank you to the publisher and NetGalley for providing me with an advance reading copy in exchange for an honest review!

I really wanted to like this book. With the most beautiful cover, a poetic title and intriguing premise, A Jigsaw Of Fire And Stars initially ticked all the boxes. But it just didn’t live up to my expectations, at all.

Touching briefly on contemporary themes such as the flow of migrants and people-trafficking, the story really focused more on Sante’s search for identity with elements of magical realism. Whilst I usually enjoy following characters on their journey of self-discovery, it was the magical elements here that I couldn’t wrap my head around. As far as Sante’s dreams and the spirits were concerned, I just didn’t get it.

It wasn’t all bad but, essentially, I disliked it more than I liked it. I enjoyed the unique writing style, even though it was at times difficult to follow, as it further helped characterise the narrator, Sante. I also liked the emphasis on family, with or without shared blood, and the bond between humans and animals like Cobra’s connection to his snakes and Sante’s relationship with her bird, Priss.

Unfortunately, I didn’t enjoy the plot so much and that was the ultimate let down. It was too slow-paced and left me confused because I had no idea what was happening. At times, I also had no idea which characters were being referred to or how they fit into the story – everyone just seemed to blur into one – as the narrator tends to call them by description rather than name i.e. Grey Eyes and Barrel Man.

Overall, this was highly disappointing. It touches on important themes and has a cast of interesting and diverse characters, but it just wasn’t as captivating inside as it is out.