In this groundbreaking collection, American Muslim women writers sweep aside stereotypes to share their real-life tales of flirting, dating, longing, and sex. Their stories show just how varied the search for love can be—from singles’ events and college flirtations to arranged marriages, all with a uniquely Muslim twist.

These heartfelt tales are filled with passion and hope, loss and longing. One follows the quintessential single woman in the big city as she takes a chance on a Muslim speed-dating event. Another tells of a shy student from a liberal college town who falls in love online and must reveal her secret to her conservative family. A third recounts a Southern girl who surprises herself by agreeing to an arranged marriage, unexpectedly finding the love of her life.

These compelling stories of love and romance create an irresistible balance of heart-warming and tantalizing, always revealing and deeply relatable.

I think anthologies are great for giving as gifts because there’s always one short story or essay that will resonate with someone and, for non-readers and those who struggle with reading longer novels, the format and length of these collections may be more enjoyable.

To mark the end of Ramadan and the beginning of Eid al-Fitr, I’ve compiled a list of some anthologies with Muslim authors that you can share as a gift to a loved one or even yourself.

Muslim men are stereotyped as either oversexed Casanovas willing to die for seventy-two virgins in heaven or controlling, big-bearded husbands ready to rampage at the hint of dishonor. The truth is, there are millions of Muslim men trying to figure out the complicated terrain of love, sex, and relationships just like any other American man.

In Salaam, Love, Ayesha Mattu and Nura Maznavi provide a space for American Muslim men to speak openly about their romantic lives, offering frank, funny, and insightful glimpses into their hearts–and bedrooms. The twenty-two writers come from a broad spectrum of ethnic, racial, and religious perspectives–including orthodox, cultural, and secular Muslims–reflecting the strength and diversity of their faith community and of America.

By raising their voices to share stories of love and heartbreak, loyalty and betrayal, intimacy and insecurity, these Muslim men are leading the way for all men to recognize that being open and honest about their feelings is not only okay–it’s intimately connected to their lives and critical to their happiness and well-being.

Habibi is a new zine-style anthology featuring prose stories and comics weaving together stories of love told by Muslim women. Each piece is a unique perspective on what love can mean to someone, whether it’s romantic, familial, or even love of self.

Very rarely are Muslim women part of the narrative on love in any of its forms and now we’re speaking for ourselves.

THE THINGS I WOULD TELL YOU: BRITISH MUSLIM WOMEN WRITE EDITED BY SABRINA MAHFOUZ 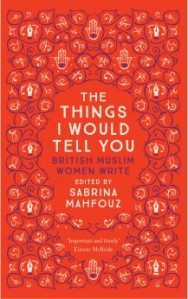 From established literary heavyweights to emerging spoken word artists, the writers in this ground-breaking collection blow away the narrow image of the ‘Muslim Woman’.

Hear from users of Islamic Tinder, a disenchanted Maulana working as a TV chat show host and a plastic surgeon blackmailed by MI6. Follow the career of an actress with Middle-Eastern heritage whose dreams of playing a ghostbuster spiral into repeat castings as a jihadi bride. Among stories of honour killings and ill-fated love in besieged locations, we also find heart-warming connections and powerful challenges to the status quo.

From Algiers to Brighton, these stories transcend time and place revealing just how varied the search for belonging can be.

FROM MY SISTERS’ LIPS BY NA’IMA B. ROBERT

Covered from head to toe with only her eyes visible, the sight of a Muslim woman on a western city street rarely fails to provoke a strong reaction. Feelings of shock, horror, repulsion, pity or even fear are not uncommon. But have you ever wondered who it is behind the veil and what makes her tick? Ever wondered what her life is really like and whether her dreams, hopes and aspirations differ from yours? From My Sisters’ Lips offers a rare glimpse into the lives of a community of women, most of whom are converts to Islam, and invites you to share their joys, sorrows, convictions and faith. When Na’ima B Robert abandoned her western lifestyle and embraced Islam six years ago, it was not a decision taken lightly. Yet soon after she took her first tentative steps towards covering, she felt empowered; no longer judged on physical appearances alone, no longer seeking the approval to feel beautiful — or using her looks to wield power over men — the experience effected her greatly. Before long she grew in confidence and courage. As she says, “Something just clicked.” I thought, “Good, don’t look; don’t compare me with your latest squeeze, don’t try and guess my measurements – my body is my own business!”‘ From My Sisters’ Lips offers a glimpse into the lives of just some of the extraordinary women who, like herself, have chosen to live behind the veil. What emerges is a vivid and intimate portrait of a sisterhood; as they speak candidly and with conviction on a diverse range of subjects ranging from marriage to motherhood, stereotypes, submission and self-image, we hear the strong, proud voices of those who are seldom heard. 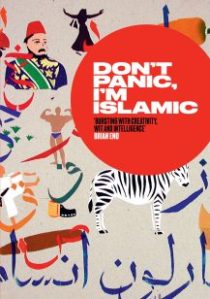 How can you tell if your neighbour is speaking Muslim? Is a mosque a kind of hedgehog? Can I get fries with that burka? You can’t trust the media any longer, but there’s no need to fret: Don’t Panic, I’m Islamic provides you with the answers.

Read this book to learn how you too can spot an elusive Islamist. Discover how Arabs (even 21-year-old, largely innocuous and totally adorable ones) plant bombs and get tips about how to interact with Homeland Security, which may or may not involve funny discussions about your sexuality.

Commissioned in response to the US travel ban, Don’t Panic, I’m Islamic includes cartoons, graffiti, photography, colouring in pages, memoir, short stories and more by 34 contributors from around the world. Provocative and at times laugh-out-loud funny, these subversive pieces are an explosion of expression, creativity and colour.

CUT FROM THE SAME CLOTH EDITED BY SABEENA AKHTAR

Perceived as the visual representation of Islam, hijab-wearing Muslim women are often harangued at work, at home and in public life yet are rarely afforded a platform of their own.

In books and in the media we are spoken on behalf of often by men, non-hijabis, and non-Muslims. Whether it is radical commentators sensationalising our existence or stereotypical norms being perpetuated by the same old faces, hijabis are tired. Too often we are seen to exist only in statistics, whilst others gain a platform off the back of the hostilities we face.

Cut from the Same Cloth seeks to tip the balance back in our favour. The collection will feature essays from 15 middle and working class women of all ages and races who will look beyond the tired tropes exhausted by the media and offer honest insight into the issues that really affect our lives. From modern pop culture to anti-blackness, women’s rights, working life; this first of its kind anthology will examine a cross section of British hijabis and the breadth of our experiences. It’s time we, as a society, stopped the hijab-splaining and listened to the people who know.

IT’S NOT ABOUT THE BURQA EDITED BY MARIAM KHAN

Picador has pre-empted a collection of essays about the Muslim female experience, edited by social media activist Mariam Khan.

The yet-to-be-named essay collection, completely authored by Muslim women “speaking up for who they are and what they believe”, came out of a desire to challenge Western views that Muslim women don’t speak and to create “a new narrative where Muslim women write about their lives outside the parameters of the expectations projected on them”.

Prompted by a leaked conversation in which David Cameron said the “traditional submissiveness” of Muslim women made them unable to speak up against radicalisation of young men in their communities, 24-year-old Khan wanted to show rather it is the West that “always tried to speak over Muslim women, to tell their story for them”.

And that’s a wrap on the #RamadanReadathon blog tour! Thank you for following along, and to all the bloggers who took part. I hope everyone discovered some new books to add to their TBRs! 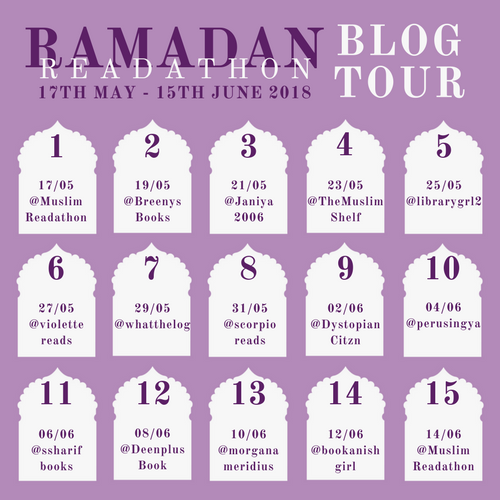