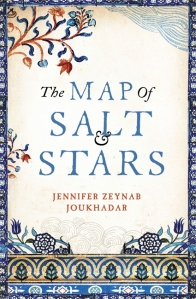 Title: The Map Of Salt And Stars

Nour is a young Syrian girl who has lost her father to cancer. Wanting to be close to her relatives, Nour’s mother – a cartographer who makes beautiful hand-painted maps – moves her family back to the city of Homs. Nour’s father was a real storyteller and he told her that the roots of the trees connect to the ground across the world. She knows they left her father in the ground back in America, so she starts telling him the ancient fable of Rawiya, whispering it into the ground so he might hear.

Rawiya left her home dressed as a boy in order to explore the world. She became apprenticed to Al Idrisi, who was a famous cartographer tasked by King Roger II of Sicily to make the first map of the world. Together with Al Idrisi, Rawiya travelled the globe, encountering adventures – including the mythical Roc and a battle in the Valley of Snakes – along the way. It is this story that gives Nour the courage to keep going when she has to leave Homs after it is bombed and faces a long journey as a refugee in search of a new home – a journey that closely mirrors that of Rawiya many centuries before.

When Nour and her sister are forced to part from their mother, she gives them a special map that contains clues that will lead them to safety. The two stories are beautifully told and interwoven, the real interspersed with the magical/imagined so that the overall effect is uplifting – about the strength of the human spirit, the strength of women in particular, the power of a journey, and what it takes to find a home.

Thank you to the publisher and NetGalley for providing me with an advance reading copy in exchange for an honest review!

“ALL THE STARS ARE DIFFERENT, BUT WHEN YOU LOOK UP, YOU SEE THEM JUST THE SAME.”

The Map Of Salt And Stars is a gorgeous, lyrical and timely debut that should be read by everyone, everywhere. The book jointly tells the stories of Nour and Rawiya, and alternates between the first and third person perspectives. At the beginning of the novel, Nour is twelve years old and Rawiya is sixteen, but this isn’t a young adult or middle grade novel by any means. In fact, it can be enjoyed by both younger and adult audiences, which is often a rare occurrence in literature.

Nour’s synaesthesia adds a layer of depth to her story, creating vivid descriptions of places, things, feelings and events in colour – the bombing of her home, the loss of a loved one – in a way that never makes the subject matter feel too heavy. Although I enjoyed reading both sides of the novel, it was Nour’s story that affected me the most. It just felt so real and, as a reader, you truly feel as if you are with Nour and her family during every step of their harrowing journey. Through the good moments, and the bad moments; through the unspeakable injuries, the deaths, the separations, the unlikely friendships, the reunions and the invaluable kindness of strangers. I couldn’t stop reading. Fortunately, there was a lot that I couldn’t relate to, but there were also many moments in which I connected to the story more than I thought I would; from Nour’s relationship with her two sisters to her insecurity with her Syrian-American identity because she can’t speak fluent Arabic.

Rawiya’s story isn’t random. It is a story within the story, representing the bond Nour has with her late father who told her fantastical tales involving the great white roc. There are many other connections between the two narratives. Nour’s mother is a cartographer who makes a living by selling hand-painted maps, whilst Rawiya becomes an apprentice to the famous mapmaker, al-Idrisi. Their respective journeys, one as a refugee and the other as an apprentice, are mirrored, with one of the only differences being the past and present names of the countries and cities they encounter. I adored how the inclusion of maps went above and beyond with the beginning of each new section consisting of a short poem, and the words forming the outline of each country we visit; from Syria to Jordan to Libya and Morocco.

Overall, I adored this book. It is a timely novel that covers the bleakness of the Syrian crisis and refugee crisis in vivid colour, through the eyes of a young American girl who loves collecting stones, and stories, and maps. Like all good stories, Nour’s journey and Joukhadar’s writing will stay with you long after the lights go out.