Ramadan Mubarak! #RamadanReadathon 2019 is finally here and this is the last round of recommendations for the bingo board prompts in case you still haven’t started constructing your TBR or decided whether you want to participate. For more details on the readathon challenges as well as the sign-up form, make sure to check out the announcement post!

I’ve been posting a series of recommendations with the help of some incredible bloggers throughout the week and this final post is dedicated to the last pillar – Pilgrimage/Hajj! The prompts include ADULT FICTION, NON-WESTERN SETTING, NO ROMANCE and INVOLVES A JOURNEY, as well as one FREE SPACE for any book of your choice by a Muslim author.

Nadia stands at the center of attention in her parents’ elegant dining room. This is the best day of my life, she thinks. Everyone is about to sing “Happy Birthday,” when her uncle calls from the living room, “Baba, brothers, you need to see this.” Reluctantly, she follows her family into the other room. On TV, a reporter stands near an overturned vegetable cart on a dusty street. Beside it is a mound of smoldering ashes. The reporter explains that a vegetable vendor in the city of Tunis burned himself alive, protesting corrupt government officials who have been harassing his business. Nadia frowns.

It is December 17, 2010: Nadia’s twelfth birthday and the beginning of the Arab Spring. Soon anti-government protests erupt across the Middle East and, one by one, countries are thrown into turmoil. As civil war flares in Syria and bombs fall across Nadia’s home city of Aleppo, her family decides to flee to safety. Inspired by current events, this novel sheds light on the complicated situation in Syria that has led to an international refugee crisis, and tells the story of one girl’s journey to safety.

Writing on the pages of her journal, Nur, a teenage girl in Canada, charts the onset and advance of her mother’s cancer. Nur watches her mother’s body begin to shrink and her mood begin to darken. And when family and friends begin to encroach, Nur must face the prospect of her mother’s looming death.

Nur bears the crushing loss and finds her adolescent life more demanding and complex. But with the legacy of her mother’s love, her family’s support, and the guidance of her faith, she manages to overcome the searing pain and use her newfound strength to bring joy to the lives of others, showing them that after death wings can expand. 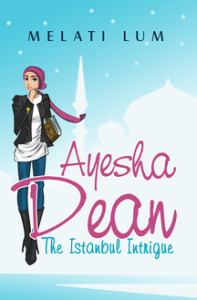 Ayesha and her friends Sara and Jess jump at the chance of accompanying Ayesha’s uncle on a trip from Australia to Istanbul. But when Ayesha discovers a mysterious note as a result of visiting an old bookshop, their relaxing holiday starts to get a whole lot more complicated! Ayesha finds herself trying to uncover a hundred-year-old Ibn Arabi mystery, while trying to avoid creepy villains, and still making sure that she gets to eat the best doner kebab Istanbul has to offer. It’s all in a day’s sleuthing when you’re Ayesha Dean. Lucky she can count on her best friends to always have her back!

A LAND OF PERMANENT GOODBYES BY ATIA ABAWI

In a country ripped apart by war, Tareq lives with his big and loving family . . . until the bombs strike. His city is in ruins. His life is destroyed. And those who have survived are left to figure out their uncertain future.

In the wake of destruction, he’s threatened by Daesh fighters and witnesses a public beheading. Tareq’s family knows that to continue to stay alive, they must leave. As they travel as refugees from Syria to Turkey to Greece, facing danger at every turn, Tareq must find the resilience and courage to complete his harrowing journey.

But while this is one family’s story, it is also the timeless tale of all wars, of all tragedy, and of all strife. When you are a refugee, success is outliving your loss.

DOES MY HEAD LOOK BIG IN THIS? BY RANDA ABDEL-FATTAH

Sixteen-year-old Amal makes the decision to start wearing the hijab full-time and everyone has a reaction. Her parents, her teachers, her friends, people on the street. But she stands by her decision to embrace her faith and all that it is, even if it does make her a little different from everyone else.

Can she handle the taunts of “towel head,” the prejudice of her classmates, and still attract the cutest boy in school? Brilliantly funny and poignant, Randa Abdel-Fattah’s debut novel will strike a chord in all teenage readers, no matter what their beliefs.

A GOLDEN AGE BY TAHMIMA ANAM

As young widow Rehana Haque awakes one March morning, she might be forgiven for feeling happy. Her children are almost grown, the city is buzzing with excitement after recent elections. Change is in the air.

But no one can foresee what will happen in the days and months that follow. For this is East Pakistan in 1971, a country on the brink of war. And this family’s life is about to change forever.

Set against the backdrop of the Bangladesh War of Independence, ‘A Golden Age’ is a story of passion and revolution, of hope, faith, and unexpected heroism. In the chaos of this era, everyone must make choices. And as she struggles to keep her family safe, Rehana will be forced to face a heartbreaking dilemma.

WHEN THE MOON IS LOW BY NADIA HASHIMI

Mahmoud’s passion for his wife Fereiba, a schoolteacher, is greater than any love she’s ever known. But their happy, middle-class world—a life of education, work, and comfort—implodes when their country is engulfed in war, and the Taliban rises to power.

In Kabul, we meet Fereiba, a schoolteacher who puts her troubled childhood behind her when she finds love in an arranged marriage. But Fereiba’s comfortable life implodes when the Taliban rises to power and her family becomes a target of the new fundamentalist regime. Forced to flee with her three children, Fereiba has one hope for survival: to seek refuge with her sister’s family in London.

Traveling with forged papers and depending on the kindness of strangers, Fereiba and the children make a dangerous crossing into Iran under cover of darkness, the start of a harrowing journey that reduces her from a respected wife and mother to a desperate refugee.

Eventually they fall into the shadowy underground network of the undocumented who haunt the streets of Europe’s cities. And then, in a busy market square in Athens, their fate takes a frightening turn when Fereiba’s teenage son, Saleem, becomes separated from the rest of the family. Without his mother, Saleem is forced, abruptly and unforgivingly, to come of age in a world of human trafficking and squalid refugee camps.

Heartbroken, Fereiba has no choice but to continue on with only her daughter and baby. Mother and son cross border after perilous border, risking their lives in the hope of finding a place where they can be reunited.

THE MAP OF SALT AND STARS BY ZEYN JOUKHADAR

It is the summer of 2011, and Nour has just lost her father to cancer. Her mother, a cartographer who creates unusual, hand-painted maps, decides to move Nour and her sisters from New York City back to Syria to be closer to their family. But the country Nour’s mother once knew is changing, and it isn’t long before protests and shelling threaten their quiet Homs neighborhood. When a shell destroys Nour’s house and almost takes her life, she and her family are forced to choose: stay and risk more violence or flee as refugees across seven countries of the Middle East and North Africa in search of safety. As their journey becomes more and more challenging, Nour’s idea of home becomes a dream she struggles to remember and a hope she cannot live without.

More than eight hundred years earlier, Rawiya, sixteen and a widow’s daughter, knows she must do something to help her impoverished mother. Restless and longing to see the world, she leaves home to seek her fortune. Disguising herself as a boy named Rami, she becomes an apprentice to al-Idrisi, who has been commissioned by King Roger II of Sicily to create a map of the world. In his employ, Rawiya embarks on an epic journey across the Middle East and the north of Africa where she encounters ferocious mythical beasts, epic battles, and real historical figures.

In a country teetering on the brink of civil war, two young people meet—sensual, fiercely independent Nadia and gentle, restrained Saeed. They embark on a furtive love affair and are soon cloistered in a premature intimacy by the unrest roiling their city. When it explodes, turning familiar streets into a patchwork of checkpoints and bomb blasts, they begin to hear whispers about doors—doors that can whisk people far away, if perilously and for a price. As the violence escalates, Nadia and Saeed decide that they no longer have a choice. Leaving their homeland and their old lives behind, they find a door and step through.

Exit West follows these characters as they emerge into an alien and uncertain future, struggling to hold on to each other, to their past, to the very sense of who they are. Profoundly intimate and powerfully inventive, it tells an unforgettable story of love, loyalty, and courage that is both completely of our time and for all time.

Salma, Moni and Iman are embarking on a road trip to the highlands to pay homage to Lady Evelyn Cobbold, the first British woman convert to Islam to perform the pilgrimage to Mecca. The women are looking for more than a holiday. Each wants to escape her life; each wants an answer.

Salma came up with the idea for the trip. Born in Egypt, she moved to Scotland for love, giving up her right to practise medicine. Now a successful masseuse, married to David and bringing up their children, she feels that she still has to make an effort to belong. And when her old boyfriend Amir starts messaging her, she is tempted to risk the life she has worked so hard to build.

Moni has been caring for her disabled son Adam for five years and is reaching breaking point. Her husband wants them to join him in Saudi Arabia, but Moni is reluctant to uproot her son, taking him to a country where his condition will render him an outcast.

Iman, the youngest of the three, in her late twenties and yet on her third husband, is burdened by her beauty. Treated like a pet by her lovers and friends, she longs to be alone and free.

On a remote hillside in Inverness, each woman is visited by the Hoopoe, a sacred bird who comes with fables from Muslim literature and Celtic folklore, forcing the women to question how much they have sacrificed in the name of love.