As part of #RamadanReadathon, I’ve been hosting a series of author interviews to spotlight new and upcoming releases from debut and established authors. I’m so excited to welcome Nadine Jolie Courtney on the blog today to talk about her upcoming novel All-American Muslim Girl!

Nadine Jolie Courtney is the author of Romancing The Throne, Beauty Confidential and Confessions of a Beauty Addict. Her fourth book All-American Muslim Girl will be published in 2019 by FSG Books for Young Readers. A graduate of Barnard College, her writing has appeared in Town & Country, Cosmo, ELLE Canada, Refinery29, Vanity Fair online, Vogue online, and many other outlets. She starred on the second season of Newlyweds: The First Year on Bravo and lives in Santa Monica, California with her husband Erik and her daughter Aurelia. She is still waiting for her invitation to Buckingham Palace. Find her on Twitter @nadinecourtney and Instagram @nadinejoliecourtney. 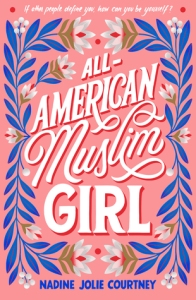 Allie Abraham has it all going for her—she’s a straight-A student, with good friends and a close-knit family, and she’s dating cute, popular, and sweet Wells Henderson. One problem: Wells’s father is Jack Henderson, America’s most famous conservative shock jock…and Allie hasn’t told Wells that her family is Muslim. It’s not like Allie’s religion is a secret, exactly. It’s just that her parents don’t practice and raised her to keep her Islamic heritage to herself. But as Allie witnesses ever-growing Islamophobia in her small town and across the nation, she begins to embrace her faith—studying it, practicing it, and facing hatred and misunderstanding for it. Who is Allie, if she sheds the façade of the “perfect” all-American girl? What does it mean to be a “Good Muslim?” And can a Muslim girl in America ever truly fit in?

Salaam, Nadine! Thank you so much for joining us! To begin with, could you quickly introduce yourself and your upcoming novel All-American Muslim Girl? How would you pitch the book in comps?

NC: Salaam, and thanks for having me! I’m an LA-based YA author. My fourth book All-American Muslim Girl comes out this November (November 12th!) with FSG. It’s about a white-passing girl from a secular Muslim family who decides to start practicing the religion her father rejects and her friends know nothing about.

If your protagonist, Allie, had to introduce herself with three interesting facts, what would they be?

NC: Allie has spent her life hiding the truth about her religious background from people and trying to fit herself into a box, so we meet her as she’s finally doing some self-reflection and trying to figure out who she is. A few details she might lead with: she’s a Circassian-American. She’s gone to eight schools in five states. And she’s loves big, dreamy, Technicolor movie musicals—something she shares in common with her dad.

What themes does the book embody? What advice would you (or Allie) give to readers who can relate to the struggles of being caught between two worlds?

NC: A recurring theme in All-American Muslim Girl is the idea of trying to be good enough—whether that’s a good enough daughter, a good enough girlfriend, or a good enough Muslim. Allie, like many people (young and old!) worries that she won’t be accepted for who she really is, and feels like she has to put up a socially acceptable façade. I’d tell Allie (or Allie would tell you!) that as scary as it might seem, it’s critical to embrace who you are and what you want, even if it upsets or frightens everybody around you. If they love you, they’ll get over it. And if they don’t get over it, it’s their problem, sadly, not yours.

Great advice! Why was it important for you to tell this story, and what do you enjoy most about writing for young adults?

NC: I love writing for young adults—and particularly 16-year-old characters—because it’s such a unique time in your life. You’re nearly an adult in look, manner, dress, attitude…and yet, there’s still something so childlike and vulnerable there. It’s the quintessential moment when you’re caught between two worlds, and that quest of trying to figure out who you are (and who you want to be) perfectly dovetails with Allie’s angst and struggle in AAMG. She is Young Me—dorky, earnest yet self-protective, anxious, questioning, and desperately trying to be perfect for everybody around her. I wrote the book I needed at that stage in my life, hoping to help other young Allies (or young Nadines!).

Or maybe just young Muslims? It makes me so happy to see so many stories like Allie’s out there, because it’s what I desperately needed as a teen but never had. On that note, what other books would readers of All-American Muslim Girl enjoy? What are some of your favourite books by Muslim authors?

NC: We are so lucky that there are finally so many incredible Muslim stories being told by Muslim authors! There are almost too many to name, but a few I’ve loved have been Saints and Misfits, Written in the Stars, Ayesha at Last, A Very Large Expanse of Sea…and for non-Muslim books, I’d say anything Becky Albertalli, who is just fantastic (and also writes books set in Atlanta).

I have Internment, Love from A to Z, We Hunt The Flame, The Love and Lies of Rukhsana Ali, and Tell Me How You Really Feel on my soon-to-be-read list. There are too many awesome Muslim books out: it’s a great problem to have, Alhamdulillah!

Those are all great recommendations! Thank you so much for joining us, Nadine, and for taking the time to answer these questions. I’m really looking forward to reading Allie’s story when it comes out!

All-American Muslim Girl will be published on November 12th 2019 by Macmillan. Pre-order the book on Amazon UK or Book Depository, and don’t forget to add it on Goodreads.

Want to win a copy of All-American Muslim Girl by Nadine Jolie Courtney? Enter the Rafflecopter giveaway for a chance to win this book or a book of your choice from any of the other authors featured during #RamadanReadathon – Shereen Malherbe, Nafiza Azad, Farah Heron, Yasmin Rahman, London Shah and Farah Naz Rishi!

This giveaway is open internationally, as long as Book Depository ships to you. Good luck!